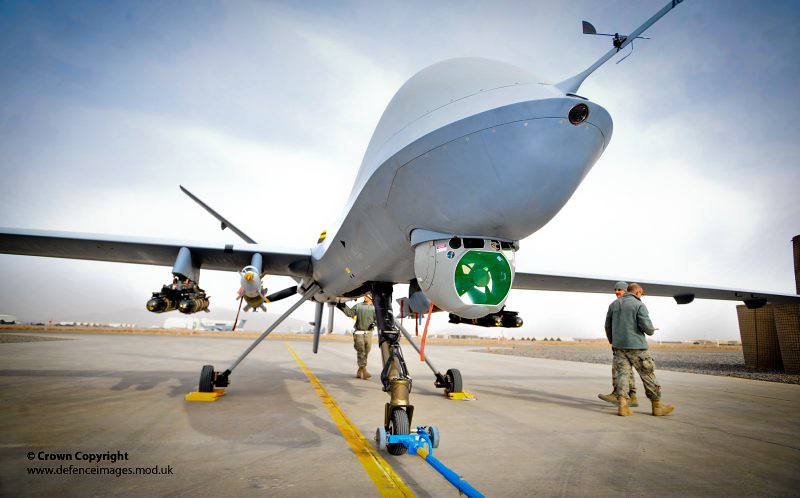 The Bundeswehr has been using drones – the unarmed types – since the 1970s and, until recently, had five different UAV models in use in Afghanistan. German firms produce smaller military surveillance UAVs and sell them to both the Bundeswehr as well as abroad. Until recently, however, the general public did not show a particular interest in these aircraft.

In mid-2012, then-Defence Minister Thomas de Maizière publically announced that he wished to procure armed UAVs for the Bundeswehr. The German Air Force supported this request. Almost immediately, the announcement stirred a public debate, which has not since abated . Because of the very costly cancellation of the (unarmed) Euro Hawk drone program a year later, drones have become a bone of contention in German politics.

For the moment, the decision is on hold (even though, in the background, negotiations with the main drone exporters, the US and Israel, are being held). The new German coalition government, in power since November 2013, states in its coalition agreement: “Already today, UAVs play an important role for […] the safety of our soldiers in the Bundeswehr operation in Afghanistan. The Bundeswehr will continue
to depend on such capabilities henceforth. The coalition will help to advance European development of unmanned aerial vehicles.” [translation by the author]

In the coalition agreement, the parties also distance themselves from the use of UAVs for “illegal, targeted killings”. This statement is good and laudable – but one has to wonder why a modern European democracy feels the need to emphasise that it is not planning to carry out illegal military operations. As it happens, there is a reason why the coalition partners felt such an assurance was needed – and it has to do with how the debate on drones in Germany has been conducted.

According to a Bundeswehr officer that I recently interviewed, “This debate started out on the wrong foot.” Indeed, how the debate on German armed UAV procurement is being conducted is problematic.

When the German media reports on drones, it usually reports on US drone use for targeted killings. German drone use gets little coverage. This is equally true in the political realm. Over the last seven years, a total of 102 questions and minor interpellations pertaining to drones have been posed to the government by members of the Bundestag. Of these, 40 discussed or questioned US drone use. Three quarters of those questions pertained to the US tactic of “targeted killing” in Pakistan, Somalia, or Yemen (the others mainly discussed the stationing and testing of US drones on German soil).

The use of armed UAVs by the US is certainly a topic which deserves considerable attention. The international community needs to discuss the legality of the missile strikes, strategists and military experts need to assess casualty numbers, and human rights activists are doing a great job pushing for a greater accountability. Also German MPs have every right – and a duty – to discuss these matters.

But how the US uses its armed drones has less to do with whether the Bundeswehr should acquire them than some people seem to believe. Every military means can be employed in different ways. The same weapon can be used in a war crime as well as in a legal military operation. Buying a tank does not inevitably lead to Blitzkrieg; likewise, procuring armed drones does not automatically lead to targeted killings outside of official warzones.

It is a positive development that the issue is being addressed and that the debate has led government officials to explicitly state that they do not intend to break German and international law. But the exclusive focus on targeted killings means that equally important and relevant questions are not being discussed. In what types of military operations, for instance, does the Bundeswehr plan to use armed drones? What types of Bundeswehr operations can be conducted by armed UAVs that cannot be carried out with other means (such as helicopters or manned airplanes)? Do armed drones, if used in the way the Bundeswehr plans to use them, actually save lives as supporters claim?

A discussion of these questions – a focused debate on what the German Bundeswehr would do with its armed drones – is needed, but is being largely overshadowed by the discussion about targeted killings.

On 31 January 2013, the Bundestag held a question time on the government’s drone procurement. The following exchange is a perfect illustration of the problems that characterize the current debate:

Hans-Peter Bartels (SPD): “I ask you, Mr Minister, to slow down and first answer this question […]: “What is the stance of the federal government on the US use of combat UAVs in Pakistan and elsewhere?”

Interjection from Elke Hoff (FDP): “What does this have to do with [our] procurement [plans], for God’s sake?” [translation by the author]

Ulrike Esther Franke is a DPhil student in International Relations at the University of Oxford, where her work focuses on the strategic implications of the increasing use of UAVs by Western armed forces. She is the Managing Editor of the St. Antony’s International Review (STAIR).

This work is licensed under a Creative Commons Attribution-NonCommercial-NoDerivatives 4.0 International License.

One thought on “The Flawed German Debate on Armed Drone Acquisition: “What Does This Have to Do with Our Procurement Plans, for God’s Sake?””